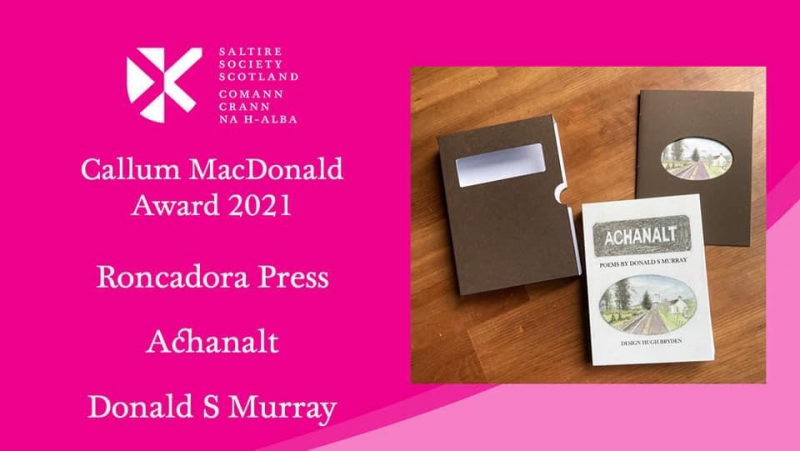 Winner of the 2021 Saltire Society Scottish ‘First Book of the Year award’ was the head of visual arts and literature at Stornoway's An Lanntair arts centre, Roddy Murray with his debut work ‘Bleak’.

The other major Island-related award went to Roncadora Press for its product Achanalt by Donald S. Murray – this won the Callum MacDonald Memorial Award.

Established in 2001, the award was created to encourage, recognise and reward the publication of poetry in pamphlet form. Administered by the Scottish Poetry Library, it is awarded to the publisher of the pamphlet.

The win was for a book of poems which had stood out for the judges even at the shortlisting stage when they stated:

“The judges were unanimous in their praise for Roncadora’s daring and inventive focus on producing beautiful pieces of art across the three examples submitted: Storm Glass, Nith, and Achanalt.

"Design choices on illustration, binding, paperstock, and typesetting all complemented one another, with Achanalt by Donald S. Murray marked out as a lyrical, haunting narrative, complemented by its retro stylistic that, paradoxically, is also resolutely contemporary.”

And the final verdict: “The Callum MacDonald Memorial Award 2021 goes to Roncadora Press. The judges were unanimous in their praise for Roncadora’s daring and inventive focus on producing beautiful pieces of art.”

Achanalt is a railway halt on the Kyle of Lochalsh to Inverness line and the series of poems is built around this little-used station.

The man who made the request stop
for Achanalt never left the train;
though we looked to see his foot or suitcase drop
upon the platform, no one ever came

from either carriage, not to claim
possession of the kirkhouse, rusted shed,
loch stretching out beside the rail.
Instead, there was an absence, 'Reserved'

flapping above seat, the fact that some had seen
him stepping on the train at Kyle or Plockton,
or reading 'Mail' or 'Scotsman' at Duncraig or Achnasheen.
But after that, he'd vanished. It was as if he'd gone

to gain absolution for his role
in how empty that this landscape was, a child of those who left
or cleared its barren acres, sailing either east or west,
but now travelling back on this line to gain comfort for his soul.

Hugh Bryden formed Roncadora Press in 2005 to allow him to pursue one-off Artists Book projects and explore book ideas incorporating his own writing.

Achanalt is in concertina form as an artists book with the 24 poems on one side and a 12ft long watercolour describing a walk along the platform and up to the grave of airman Bertram Dickson on the other side. The accompanying short story is printed separately, and both enclosed in a slipcase.